In late October of last semester, a group of ten Prague City University School of Art and Design students and four lecturers (Paul DeLave, George Allen, Franco Huller and Sean McAlorum) made an amazing trip to the 57th annual Art Biennale in Venice, Italy. This year’s theme was “Viva Arte Viva”. “Viva Arte Viva is an Exhibition inspired by humanism” stated Christine Macel, director of the 2017 Biennale, and chief curator of the Centre Pompidou in Paris (labiennale.org, 2017) 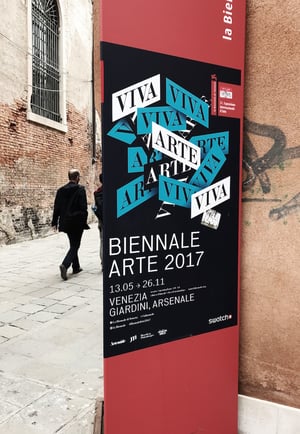 The Venice Biennale is one of the most famous and important artistic events in the world. It has become the prototype for large-scale biennial international art exhibitions since its inception in 1895. “The show featured 120 invited artists, of which 103 were participating for the first time, 86 National Participants, a Special Project and 23 Collateral Events.” (biennale.org, 2017) and this year, it attracted more than 615,000 visitors.

The Biennale takes place in two major venues- the Giardini and the Arsenale. The Giardini is an extensive garden district created by Napoleon at the beginning of the 19th century. It houses installations and national pavilions dedicated to art, housing the work of national representatives. The Arsenale was built in 1303. Venice was the leader in naval ship-building from the middle of the 13th century and the ships were assembled in these enormous, beautiful Renaissance-style brick sheds. The group stayed in the Foresteria Valdese di Venezia, which is housed in an 18th century palace, conveniently located about 15 minutes walking from the main art venues.

Art from almost every imaginable medium- painting, sculpture, video art, performance art, multi-media, print-making and more - was represented. Particularly moving was the contribution from South Africa, which featured video installations of the artists Candice Breitz and Mohau Modisakeng. Both artists featured the themes of identity and selfhood. “Mohau’s work speaks to the various forms of migrant and indentured labor throughout South Africa’s past (and present).” (5and10.com, 2017) and featured haunting black and white video images. Breitz’s two-room installation featured video-based performances from the well-known American actors Alec Baldwin and Julianne Moore. The actors reinterpreted direct interviews with immigrants who survived arduous journeys to make it to safety.

This year, the representative of the Czech and Slovak Republics was Czech artist Jana Želibská (born in Czech, but primarily living and working in Slovakia), with her multi-media installation Swan Song Now (Labutia Pieseň Teraz) which featured internally illuminated plastic swans arrayed against a large-scale video screen projecting the sea surrounding Venice. The “lighted swans dwell on islands representing the eternal yearning for permanence amid a world driven by constant changes”(spectator.sme.sk, 2017)

We had the great honor of meeting Franco Huller’s old friend and colleague Matteo Giannasi, who is a representative of the Biennale, and all-round brilliant fellow. He gave us a private introduction to the event, as well as revealing some of the local entertainment venues, well off the tourist beaten track. In a fascinating late-night tour, we peeked into inner courtyards and saw more of the residential districts of Venice. We hope to make the trip back in 2019! If you have any questions or comments, please feel free to contact Paul DeLave, paul.d@praguecollege.cz