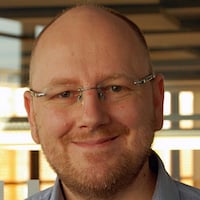 Matěj Smetana teaches in the School of Art and Design at Prague City Univeristy and mainly in our flagship Masters in Fine Art. He studied the School of Creative Arts (FaVU) in Brno at the Intermedia and Painting 3 studio of Petr Kvíčala and the Academy of Fine Arts (AVU) in Prague, where he received his Ph.D. degree.

In addition to teaching at Prague City University he is a specialist assistant at the Intermedia and Multimedia Department at the Academy of Fine Arts and Design (VŠVU) in Bratislava, and an assistant professor at the Environment Studio at FaVU in Brno.

Smetana has already built up a large portfolio of work involving both solo and group projects. He looks upon his working method as a kind of conceptual game, and play is the principle inseparably linked with his work. Using the game he analyses certain processes and procedures linked with the way we perceive, while eschewing complexity and ensuring his work is characterised by simplicity of resources and intelligibility, combined with meaningful depth and imaginativeness.

Every work of his asks the question: “What would I do if...?” or “What would happen if...?”, as though we were wondering how to cure boredom, play a game, or think of an idea, and an infinite set of possibilities opens up. The artist then creates certain rules and procedures according to which the work emerges. It is for this reason that his approach is sometimes compared to scientific research.