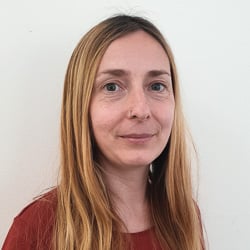 Programme Leader
School of Media & IT

Masa Hilcisin is a filmmaker, producer, lecturer and scholar, who has been working at Prague City University since 2009. She holds a BA in Comparative Literature, an MA in European Studies, and a PhD from Masaryk University.

Her professional background includes work for media, cultural and human rights organizations in the region of former Yugoslavia where her interests were centred around human rights activism, cultural activism, media research and media formation within the context of nationalism.

For over a decade, Masa has been committed to making films on social issues and different aspects of violation of human rights. Her documentary films have been screened at various film festivals around the world including the Berlinale, the International LGBTI Film Festival in Mumbai, Frameline in San Francisco, MIX in NYC, and the International Women’s Film Festival in Dortmund|Cologne.

She has participated in a number of key projects at Prague City University, including Underground City XXI, Amnesty International workshops, and events organized by the Centre for Research and Interdisciplinary Studies.

In 2014, Masa gained her PhD from Masaryk University's Department of Film Studies and Audio-Visual Culture with a thesis on the subject of authenticity in representation in the observational documentary film of Helena Třeštíková.

Masa has been involved in many cultural and artistic projects including film festival curating, and various women artists support initiatives.

- main coordinator of educational programme for journalist from former Yugoslavia at the Mediacentre, Sarajevo

- director of short films dedicated to topic of he human rights

Publications and other creative activities

2018 - series of Engaged arts workshops at the community centre InBáze

2014-2018 pre-selector of documentary films within One World festival, Prague