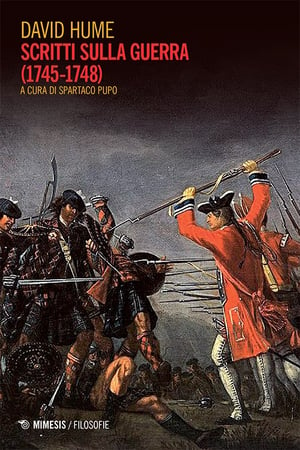 Lucie Rivera and Stefano Cavagnetto of Prague College School of Business are the joint authors of a review of a significant new Italian translation of the writings of David Hume. The review was published in the 2018 edition of the well-respected 'History of Economic Thought and Policy'.

David Hume is widely recognized as one of Britain's greatest philosophers, but he also happened to live during the tumultuous upheavals of the Jacobite risings, the attempt by Charles Edward Stuart to claim the British throne on behalf of his father, the catholic James Stuart. Hume's commentary on this period is now translated in a new Italian edition by Spartaco Pupo, published by Italian imprint Mimesis.

In their review Ms Rivera and Dr Cavagnetto write with interest on Hume's own failure to express a 'unified and coherent view of Jacobitism', attributing his difficulty to the complex mix of ideological positions adopted by its supporters. Among these was a form of Scottish nationalism so deeply rooted in mysticism that, as they point out, it would 'not appeal to Hume's empiricism at all.'

But the two Prague College lecturers are also keen to stress the European context of the Scottish uprising, which took place in the wider context of the War of the Austrian Succession. Just as the French supported the Jacobite uprising partly in order to draw the British away from the war in Europe, so the British, in 1746, undertook a raid on Brittany to divert the French army. It was a 'comic adventure' wrote Hume, of those who 'head for an unknown coast, and march towards an unknown country'.

That last sentence sounds all too familiar to us in 2018. In terms of understanding the complex relationship of the British and Europe there has never been a better time than now to reassess the words of this luminary of 18th century philosophy.

The reviewers conclude that Pupo's translation provides not only 'an excellent source for scholars aiming at understanding Humean thought', but also a more complete picture of the complex history and dynamics of the Europe of the 1700s. Hume's writings, they tell us, display a 'calm, poised and ironic series of reflections' on a period dominated by 'a resurgence of populism, nationalism, and fanaticism'.