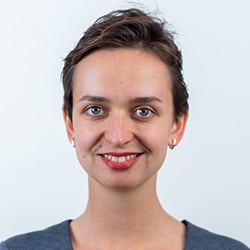 Andrea is a founder of the visual research platform Fresh Eye and works in the fields of visual culture studies, memory studies and visual sociology. Her research work has been published in Life Writings and Politics of Memory in Eastern Europe (Palgrave Macmillan, 2015) and in Historiography of National Leaders: Symbolic Representations in School Textbooks from Around the World (2017).

She has translated Berger’s Ways of Seeing and co-translated Mitchell’s Picture Theory to Czech. She has attended several international conferences (e.g. in NYC, Cardiff, Valencia or Wroclaw) and lectured at Columbia University, New York University and the Pratt Institute.

In 2013 she received a fellowship from the Georg Eckert Institute, and was awarded a three-year research grant from Charles University, which was devoted to her doctoral research on the visual culture of modern and contemporary history education.

She is also a researcher at the Czech National Film Archive and at the Institute for the Study of Totalitarian Regimes.

From August 2015 until February 2016 Andrea was a Fulbright Visiting Scholar at New York University, Department of Media, Culture and Communication, and at the Pratt Institute School of Social Sciences and Liberal Arts, in the programme of Critical and Visual Studies.