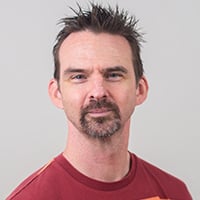 Sean McAlorum has been teaching and coordinating programmes here at PCU for a number of years. Before his current role, he set up the Foundation Diploma in Art & Design Programme at PCU.

Prior to teaching, Sean spent over twenty years working as a full-time designer in the fields of both magazine publishing and advertising. In publishing, he worked at Future Publishing in Bath, whilst in London he worked for a number of years on a well established independent consumer title called Which? Sean specialised in re-designing  the titles and hence spent time coordinating with editors and writers to achieve these goals. Sean then decided he required an adventure, which continues to this day, and continued his publishing career here in Prague on a title called Quo, which subsequently won the best Czech magazine of the year in 2000.

Whilst in Prague, Sean switched to the field of advertising, which had held a fascination for him since a child. At Leo Burnett, Sean won local awards, a Golden Watch at the Golden Drum Advertising Festival in Portoroz, Slovenia and helped the agency win the Agency of the Year at the same festival for two consecutive years. Sean also worked at Ark Thompson, which later became JWT. Whilst in adverting his clients have included Fiat, Nestlé, Unilever, Gambrinus, Kraft, Mazda and ČSOB.

Latterly Sean, has been focused upon the setting up, coordination of and refreshment of modules on the graphic design programme. He prides himself on being a hands on and approachable programme leader for both the lecturers and the students, He always strives for the best experience for all and teaching on a number of modules, himself, helps Sean to connect with the students and he loves watching them grow into confident designers and people.

Recently Sean also challenged himself, by a return to education, by studying an MA in Fine Art, with a focus on oil painting. Now graduated, he is actively pursuing painting, which started with an exhibition through the summer entitled an “Invitation to Bear Witness” in his local village on the outskirts of Prague. Sean looks forward to balancing his lecturing with a parallel career as an artist…