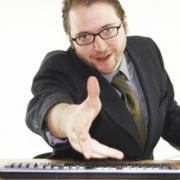 Jeremiah currently teaches Visual Production and Drawing Techniques, emphasizing not only the importance of technical proficiency, but also how to be a creative individual. He shows his students how to draw inspiration from various sources which they can incorporate into their own personal styles.

Jeremiah attended the Lyme Academy of Fine Arts, Glasgow School of Art, and the School of the Art Institute of Chicago, from which he graduated with multiple focuses in Painting as well as Art History. His work has been featured in magazines as varied as Level, Print, Wired, and Domino. Much of his success can be attributed to large online blogs which frequently feature his new works. He has created paintings for Google's headquarters in California as well as having some of his pieces in the private collection of Chad Hurley (the founder of YouTube).

Jeremiah's oil paintings focus on the digital world; much of the attention he has received can thus be attributed to the fact that he creates paintings about technology rather than traditional subject matter. When not posting new works to his website he shows at Styx Gallery in Berlin.

BFA, School of the Art Institute of Chicago