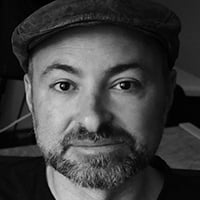 Basil Hogios is a professional composer and sound designer in film, media and performing arts, working on diverse projects on all scales, from apps to stadium events.

Known for unique sound, an 'inventive crossing of musical genres set in evocative sonic atmospheres'. Originally from an architecture and music background, then trained in film, combining creativity and passion for story-telling with working to a brief and managing projects to a high professional standard. High level knowledge and skill in audio production, mixing, technology and software, always keen to learn new technologies to express emotion and character through sound and music. Especially passionate when helping to develop a dramatic vision from conception to completion, dependable and self-motivated.

Bachelor of Architecture
University of NSW, Sydney widely in the Czech Republic, Slovakia and Ukraine.

- "How to Train Your Dragon", Dreamworks, Global Creatures

- Many short films and advertising spots: music composition and some with full sound design and mix

- Independent production, some of which have been in Sydney, Perth, Adelaide International Arts Festival roles - creating pre-recorded and live scores and surrounding sound design