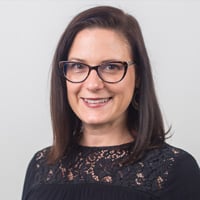 Kelly Hoben is a professional art educator from Columbus, Ohio (U.S.A.), who relocated to Prague in 2010. She holds a Master’s degree in art education from Ohio State University where she also earned Bachelor’s degrees in both art education and English on a full academic scholarship. Under the tutelage of the world-renowned author, art educator and critic, Terry Barrett, Kelly became fascinated by art criticism as an integral part of effective art education. In Ohio, she taught secondary school drawing, painting and art history and worked to support the longest-operating nonprofit gallery for emerging contemporary artists in the Columbus arts district as its acting grant writer.

Since joining Prague City University in 2012, she has continuously developed the fine art curriculum in critical writing and aesthetic theory, which are the subjects of the modules she teaches. She has exhibited her paintings both in the U.S.A. and in the Czech Republic.