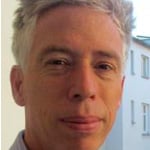 David Vaughan is a writer, broadcaster, journalist and university lecturer, who teaches in the BA (Hons) Communications and Media Studies programme at Prague City University.

For eight years he was editor-in-chief of Radio Prague, the international service of Czech Radio, and previously he was the Prague correspondent of the BBC, travelling widely in the Czech Republic, Slovakia and Ukraine.

David has won national and international awards for his work in radio journalism. He studied Modern Languages at Balliol College, Oxford. He is married with two children.